We are a team of driven individuals with backgrounds in econometrics, quantitative finance, and financial engineering. Combining decades of theoretical literature with practical algorithmic trading experience, our bots possess the optimal fundamentals for success.

Laika and the Quants also have a Discord channel. The company is named after the infamous soviet space-dog: Laika.

The developed bots initially had, the names (search LQ) of historic space missions, each with a specific purpose and state-of-the-art signal generating techniques. So choose a rocket, and let Laika and her team quants guide your portfolio into space!
Currently (Jan 2022) there are 24 LQ Bots.

Bamboo (BO) by Team Agga™ (AB) focuses on state-of-the-art passive products that provide smart exposure to certain themes within the cryptocurrency space. The aim is to provide smart passive exposure (HODL) with the smallest transaction fees possible to keep your profits as close to the profits of the underlying assets.

This means the portfolio will be rebalanced in the most cost-efficient way to keep dynamic exposure to the top assets within a certain theme. The rebalancing happens with minimum trading fees: a set of target weights is calculated each month and buy or sell only what is needed to reach the new target.

All bots use algorithms to distribute your funds over different coins within your chosen theme, without having too much exposure to single assets. This is the best way to balance risk between assets.

Bamboo initially launched  7 bots,  all available in the App.

All of the products have the aim of providing smart passive exposure with the smallest transaction fees possible to keep your profits as close to the profits of the underlying assets!

Stablecoins are not included in each Bamboo bot (excl. USDT), nor any assets that are not available on the BOTS platform.

Bamboo is a product by Team Agga, a large Netherlands-based team consisting of experienced quant-traders with backgrounds in Applied Physics, Mathematics, Computer Science and Econometrics.

This is the (part of) third month-period after I started this bot on 12 October 2021. This concludes the (interrupted) 3rd period. Unfortunately we cannot conclude the 3 month-period as intended. Stopped de bot on 31 December 2021.

BOTS and Bloqtec B.V. will no longer be working together as of 2022. The bots from Bloqtec will stop sending signals as of December 31st 2021. You will have until January 18th 2022 to stop the bot yourself, after this BOTS will close the bot for you and the balance will be transferred to available funds.

In the previous two periods the ATT-bot managed to jump to 40% in the first trade-period and from 40% to 60% in the 2nd period,

Above diagram was the BTC in the beginning of the 3rd period, the week just before Christmas.

After a few weeks of dormancy the bot started trading again.

Interesting to see that all my bots wend down, whereas At the top (ATT) was still out of position, showing the flat horizontal line. 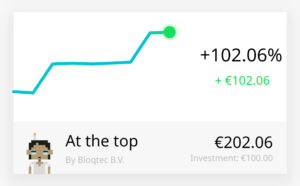 The fourth jump in value during, the now almost, three-month observation period.

This bot proved to use an interesting and profitable algorithm.

Related: Withdrawn: Why Bots are removed from the BOTS-platform. 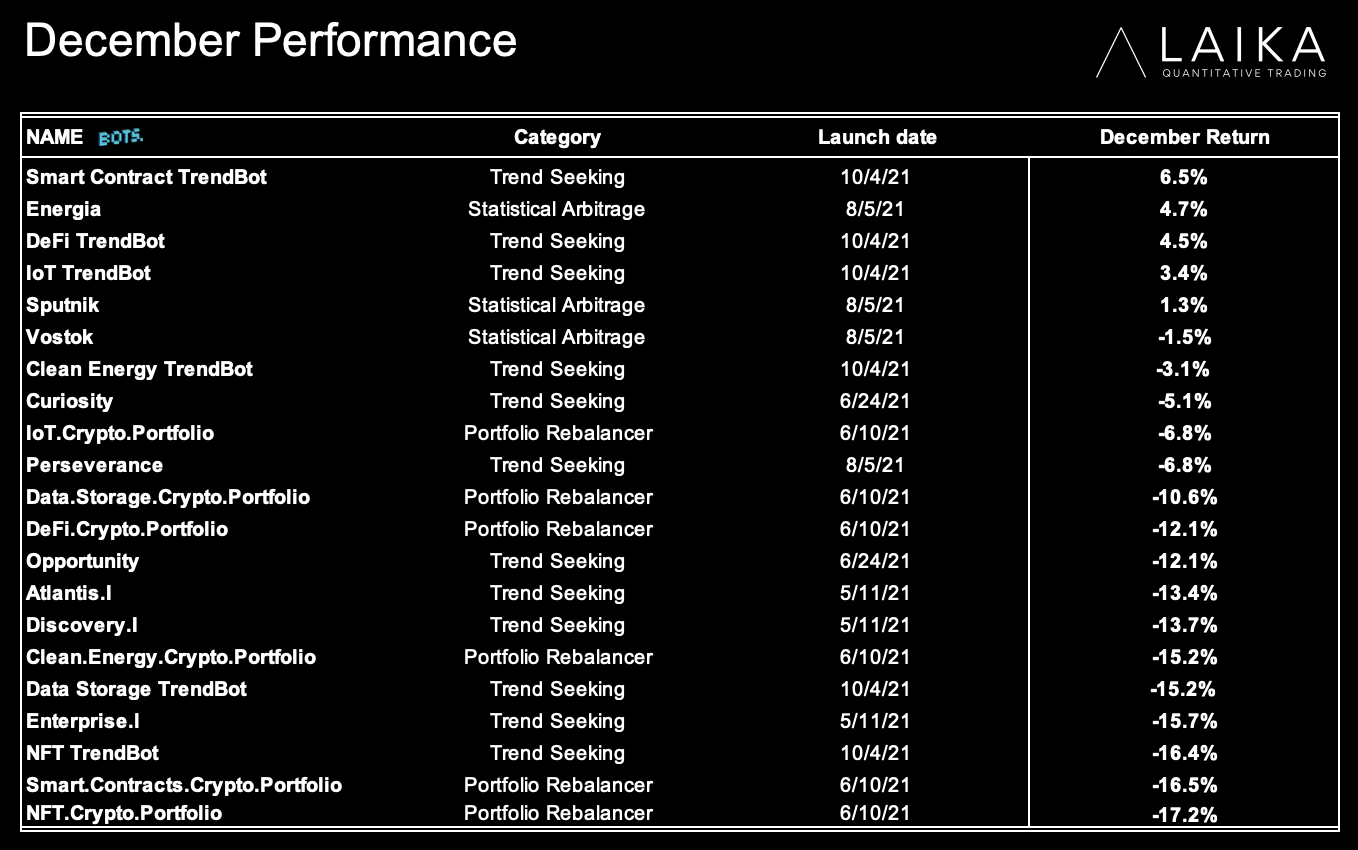 December was a difficult month to be profitable, as the results of the market has shown. The largest asset in the market lost more than 15%, while some altcoins had even larger declines.

The performance shows that the best strategy was to have only small positions, which some bots partly succeeded in, while the portfolio bots logically struggled.
Above, an overview of the Laika performance of December 2021 on the BOTS platform. 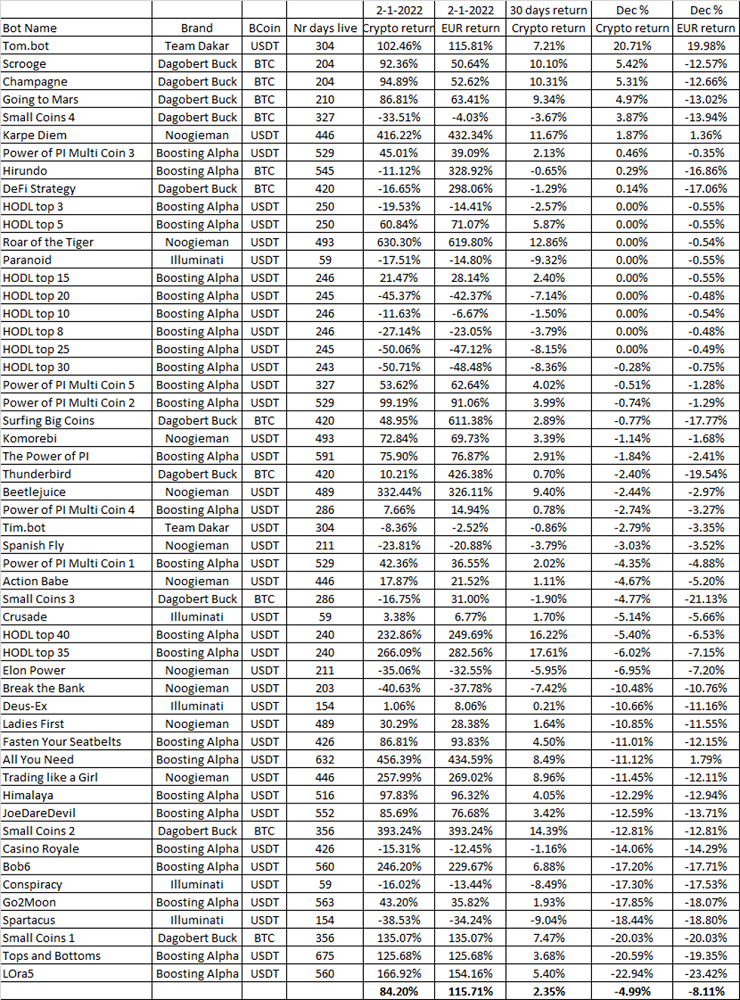 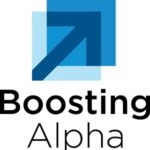 Here are the December results for all bots from Boosting Alpha, Noogieman, Illuminati, Dagobert Buck and Team Dakar.

Where Bitcoin decreased in value in December with roughly 17%, the average decline in our trading bots was 5% in crypto terms (basecoin) and 8% in EUR terms. Some of our BTC-based bots managed to increase the amount of BTC in this period (while in EUR terms they declined since BTC value got lower).

Also notable mentions for our HODL the Bottle series. Almost all of them (except the top 35 and top 40 versions) remained stable because they decided to stay out of the market in December which was a very good choice off course.

By using the BI-Dashboard (trabo) sort on e.g. 3M, 6M or 1Y and Favorites to show the best performing and compare your bots to select the best!
https://www.bots.institute/a-homepage-section/tips/comparison/
#referral @TheBOTSapp #cryptocurrency #digitalassets #tradingbots #bots #revenyou